Only two days before our arrival in Maribor, on 26 November, “The second Maribor uprising” (one in a series of public protests) took place. About 10 000 people demonstrated against “Maribor sheriff”, the corrupted mayor Franc Kangler, on the Liberty Square (Trg svobode). Kangler allowed a private company to collect 92% of fines from traffic violations in Maribor, although this money should have gone into public funds, as common sense and basic administrative logic demands. During the evening, the area was basically turned into “a war zone”, as reported by the press, an event unprecedented since Slovenian independence in 1991. As the police was using force, tear gas, dogs and horses, the violence escalated. The director of the Maribor Police Department later denied claims of excessive use of police force, however numerous videos have appeared on youtube and elsewhere, showing that the police was the first one to start, when they threw tear gas into the crowd.

This provided a compelling background for the Balkan Express meeting entitled “Sustainability of Artistic Action”, as it showed a frightening instance of a private abuse of power, of the way common funds (public funds) are turned into profit (or rather, stolen) for a private company via a highly positioned public officer, the one who should be the guardian of those very public interests. This was not an isolated incident, neither in Slovenia, nor elsewhere, but rather an exemplar for what has been happening for years to the public sector in capitalism. In addition, as an icing on the cake, the state apparatus protected the theft from its own sector, or rather, protected its own undermining by attacking the protesters. This reduction of public sphere, both in terms of funding and in terms of freedoms, is something that directly influences the ideas and practices around the sustainability of artistic action.

Balkan Express network was founded in 2002, with emphasis on mobility, cooperation and exchange of experiences and information on contemporary (performing) arts scene in the region. With the theme of this meeting, “Sustainability of Artistic Action”, it seems to me that Balkan Express is making a shift towards an active engagement with urgent conditions of the disappearance of public sector and public support for the Arts. Balkan Express was always interested in the role of arts in the building of the social fabric, and in the mutually transformative processes between art and society, however its focus was perhaps more on mobility and exchange, whereas nowadays, it seems that we have reach a critical point. 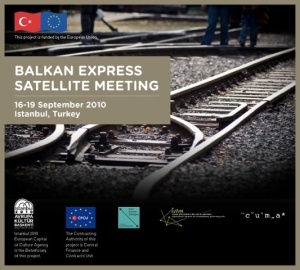 “Sustainability of Artistic Action” took place within the framework of International performing arts festival Drugajanje and the City Lab, a part of the project Global City – Local City. Drugajanje festival, organised by Bunker on the initiative of the headmaster of a high school Ivan Lorenčič, and in collaboration with the II. gimnazija, attempts not only to present performances to the citizens of Maribor, thus questioning the cultural primacy of Ljubljana and also establishing links with Ljubljana, but also to produce and host works which operate with the city of Maribor, taking into account its specificities. 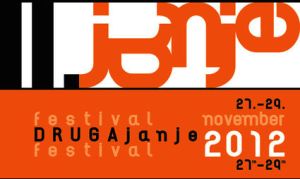 One of the works presented at the festival was especially interesting in the context of thinking about the sustainability of the arts. Saška Rakef performed her solo The Debt of Rakef Saška / The Debt of RS dedicated to the absurdities of a situation in which she has found herself in debt by proxy and her futile attempts to get out of it by “saving”. The performance is not simply a story of a family company going bankrupt, but reads as a metaphor for the situation in which various nations, communities and regions have found themselves in, as a result of bad economic decisions in search for more profit on the other side of the planet. 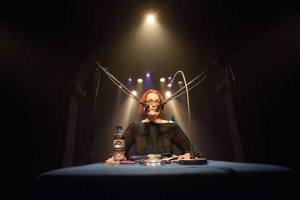 The Drugajanje festival itself became the member of the Global City – Local City project which gathers festivals in Europe in a network whose aim is slightly different each year, but in general it deals with the issues related to festivals, their curation and possibilities of communicating to the local politicians the values that festivals bring to a community. The meeting of artists and cultural workers related to the Global City- Local City in Maribor took place at the same time as the meeting of Balkan Express initiative so we held a session together. Global City – Local City meeting in Maribor was dealing, amongst other things, with the complexities of Maribor, as was rather wonderfully stated on their website:

I am mentioning this not only in order to provide the context for the Balkan Express meeting and circumstances in which it took place, but also to draw attention to the fact that such decision to combine various events together is one strategy for the sustainability of arts/cultural events that is used a lot in the field. As most of us in the field are at the same time involved with various activities not only because we like it, but also out of existential reasons (for instance I am also a theatre critic, an independent scholar, a lecturer and a translator) it makes perfect sense that a travel to another city because of one project also enables me to see some performances, hear about a different project in addition to the one I am involved with, get to know the possibilities of particular venues, get to know about local initiatives etc. With this double or triple bill, I have more opportunities to survive – I get inputs for my academic work, I can compare performance production of Zagreb to the performance production of Maribor and other cities I have visited in articles for cultural magazines read by wider audiences. One event like this generates more possibilities for, let us call this “personal sustainability”, which then consequently leads to more opportunities of, well, work, both for me and others.

Like this, several events and organisations can share the costs of bringing people over, and also of promoting the work of local artists who can then get the opportunity to perform elsewhere due to their work being seen by somebody who will recommend it further etc. However, there is a downside to that – time is limited, but so is our ability to digest information that we receive, and sometimes if too many things are happening at the same time, a lot of it gets lost in the struggle to keep afloat with all this data. Human ability to concentrate is, after all, limited. Thus, cultural workers are basically forced to choose between working too much and working too much, because

These practices are often not discussed enough, because the field takes them for granted – this is an accepted practice that doesn’t require a particular analysis, that happens automatically. However, once you start thinking about it, you realize that this is also a way of shooting yourself in the foot in terms of audience presence. Audience can, after all, only choose one event at a time, even though it might want to see them all, because these events fit the same “type” of production attracting similar audiences. Which means that by reducing your costs of bringing people over (both artists, curators, cultural workers) via inviting them to various things happening at the same time, you are not really increasing the number of people who actually can see a performance, as various events are in competition with each other.

What happens is also that this then becomes a highly professionalized event, only for people who are anyway working in the field and whose means of survival is to follow the production, whereas unprofessional audience can also get turned off by the sheer number of relatively “similar” events. Last but not least, it is quite hard to communicate various events to the press and to explain how they relate to each other. What usually happens then is that one of these events overtakes other events in terms of visibility, and instead of doubling the promotional effect you get its reduction – events that are also happening at the same time get lost in favor of the one which is bigger or easier to prioritize.

One response to “Context comes from con-textere (to weave, to interlace together): a report from the meeting of Balkan Express (BE) network in Maribor, Slovenia, entitled Sustainability of Artistic Action, 28 till 30 November 2012 // PART 1”