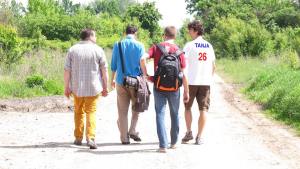 “I arrived to Cluj-Napoca, Transylvania, in the middle of the night. The journey was smooth and rather uneventful – the airport art galleries with suitcases and perfumes have lost their charm a long time ago. Somewhat sleepy Rarita led me down this infinite street, accompanied by a single house, which turned out to be a massive apartment building with thousands of flats inside. She brought me into a charming apartment and the soft white bed there made me sleep like a baby. Next morning I came across the most unusual, neoliberal coffee machine, which bereft me of quite a few dreamy morning minutes. I knew that Vahe from Armenia – whom I haven’t had the chance to meet yet – was sleeping in the next room and so I immediately decided to set an ambush for him in the living room. I waited for quite some time to see this poor tired creature wake up. His journey had been substantially longer and far more exhausting than mine. Vahe is simply great. We ran to our first breakfast together, which awaited us in the apartment where our competitors in the Balkans-Caucasus project were based. Their place was just 30 seconds away, but we ended up arriving late since we got lost on the way. I was received with a heartfelt welcome as the last arrival. Well to be precise, the reason for such warm welcome was actually my country of origin. It wasn’t until now that I fully realised what it means in this part of the world to be a citizen of the Žižek-Dolar country.

We quickly became acquainted with each other as we exchanged our views over basic geopolitical issues and our attitudes towards Stalin and Marx. Breakfast was then followed by individual presentations from each of us in front of what at this point already became a family circle. And truth be told, despite serious approach each of us took in our presentations, we soon came to realise that witty humour is a common feature of the Balkans- Caucasus project. Vilmos, a bilingual Romanian living in Hungary, presented his project on the question of vegetarianism and our attitude towards meat. He invited a horse, a pig and a cow respectively for dinner. He’d dine horse meat and have the horse on the other end gobble kohlrabies and carrots meanwhile. Giorgi from the Eurasian country Georgia showed us his activist video, where he tries to explain to his two-year-old daughter what institutions such as bank, police and government are. It was all truly, madly and deeply interesting.”

A nomad Artists-in-Residence programme was a part of the wider project Caucasus – Balkan Express, which uses the metaphor of a train line connecting the Balkans and South Caucasus and is the project aimed at building connections, stimulating reflection and facilitating cooperation among artists and cultural producers in the two regions.

The residencies took place from May – June 2015. Artists Vahe Budumyan (Armenia), Giorgi Khasaia (Georgia), Vilmos Koter (Romania) and Tanja Radež (Slovenia) explored the urban realities of Cluj, Tbilisi and Yerevan and produced a series of artistic interventions in public space, to reflect back to the local communities their insights.

The project Caucasus – Balkan Express will continue its route in Ljubljana, where all four artists are invited to create artistic interventions in public space of Ljubljana, in the frame of the 18th International Festival Mladi levi (23rd – 30th August 2015).

Caucasus-Balkan Express project is initiated by the AltArt Foundation, Cluj and Balkan Express Network, Ljubljana, in partnership with Public Art Platform and Bouillon Group, Tbilisi, and ICA, Yerevan. With the financial support of the Black Sea Trust – A Project of the German Marshall Fund of the United States, The European Union – Culture Programme and the Romanian Cultural Institute.